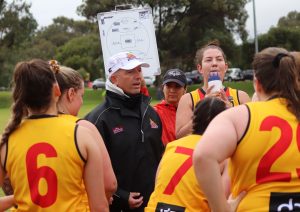 Hayden Marchetto makes a point to his charges on Saturday

For a few years now we have watched the renaissance that is women’s football accelerate at a remarkable rate.

And that progress was seen on two fronts at Charles Riley Reserve on Saturday morning.

Firstly, the Project Ceilings A-Grade women kicked things off on the main oval against Quinns Districts and scored a stirring victory.

In the worst of the conditions for the day, they toiled throughout and despite the greasy football and the soft, shifting surface the Beach girls showed poise and skill to score a meritorious 18 point victory – 2.6 (18) to 0.0 (0).

On the northern oval, starting a little later, The Peak Body Fitness C4-Grade women did battle with Rossmoyne.

The Beach girls had their moments and their opportunities to win, but Rossmoyne were a little more efficient with their ball use when it mattered.

This squad is gaining momentum, Hayden Marchetto and his coaching staff are genuinely excited and the second half of the season presents opportunities for growth. That is not merely about winning and losing, but acquiring a deeper understanding of the game, developing skills and, most of all, having fun.

That sense of enjoyment was clearly evident on Saturday.