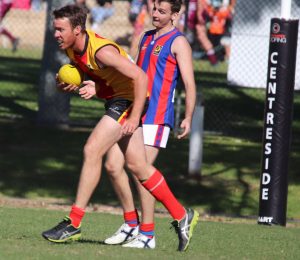 The North Beach third and fourth grade teams, as well as the Brett Jones Colts, tuned up for this weekend’s finals series with impressive victories in the last qualifying games  of the season.

The Hybrid Linings C4-Grade warmed up for this week’s first semi-final with a commanding performance against arch rivals Whitford at Charles Riley Reserve.

With key forward George McColgan, one of the most exciting young prospects at the club, leading the charge with a six-goal bag and Adam Clark playing his best game since resuming from a nine-year absence from footy, The Beach were always in control before winning by 36 points – 13.9 (87) to 8.3 (51).

Ruckmen Tom DeCourtenay and Ryan Clapham worked well in tandem while Andy Langsford played with the same grit that has punctuated his career while Mason Rollo and Tully Wickstein were also important.

The Coast to Coast Imports C5-Reserves will also play a first semi-final and will go in full of confidence  after a whopping 179-point belting of Whitfords.

Led by Nathan Adler, who kicked 10 goals, and another standout performance from Jack Steel who also bagged six goals, the Beach Dominated every moment of this match.

Ben Evans, Caleb Davis, Khalil Campbell and Tom Orford were also strong contributors in a team performance that had winners in every position on the ground.

The Indian Ocean Hotel Brett Jones Colts were no less dominant against Kingsway, winning 24.15 (159) to 1.2 (8) as they prepare to play a second semi-final this weekend.

Ben Hodge and George Mortimer each kicked five goals, while Rhys Irvine kicked four in a brilliant team display that has them cherry ripe for a clash with Curtin University-Wesley.