Lower grades round off finals prep 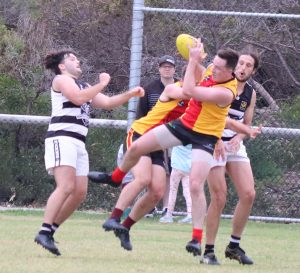 Mitch Cameron…continued his goal-kicking form. for the Hybrid Linings C5-Grade.

The last qualifying game of the season was a dead rubber for both the North Beach third and fourth grade teams, having already locked away top spot and earning a break when finals kick off this weekend.

Sometimes, having already done the hard work, it can be a challenge to mentally switch on given little is riding on the contest. One team handled that situation better than the other.

The Hybrid Linings C5-Grade, coached by club legend Bill Duckworth in the absence of Glen Hinkley, who had major surgery during the week, were as methodical as ever in completing the home and away rounds with a solid victory.

Against the highly regarded Curtin University-Wesley, the Beach got away to a solid start, held the opposition to just one goal after half-time and controlled play for the balance of the match on the way to a 48-point triumph.

Josh and Mitch Cameron were dominant up forward, kicking seven goals between them, while Nathan Torre and Jayden Black exerted a strong influence around the ground. Jack O’Gorman and Nick Wells also showed their class in the 11.14 (80) to 5.2 (32) result.

The Beast Carpet Cleaning C5-Reserves were marginally short of their best and it was enough for Curtin-Wesley to pounce as they inflicted the first loss of the seasons on the fourths.

The cause was not helped by the loss of key defenders Brendan Collins and Liam Vardy before half-time as Curtin finished stronger to win 7.5 (47) to 4.7 (31).

It was a very hotly contested game from the first bounce and Lucas Gardiner was outstanding taking multiple big intercept marks.

The Beach fought really hard, and were controlling most of the game in the second half but were wasteful going inside forward 50.

Wesley were clinical with their intercept and rebound game and took all their opportunities. Callan Dunjey and Joel Brown were terrific in the midfield, and Ryan Clapham rucked tremendously all day, without a rest.

Isaac Seidner was dangerous up forward and Riley Duncan was also strong down back, providing several intercept plays.

The Beyond Tools E2-Grade laid a strong foundation for a finals assault with a commanding display against Bullcreek Leeming, who were sitting one place below them on the ladder.

The Beach won 12.15 (87) to 4.7 (31) to complete a strong back end of the season which sees them in a good position to challenge through the finals series.

Familiar names were at the forefront of the victory, with Mitch Tobin, Jacob Willis and Tom Maxfield all outstanding, while Mason Lawrence, Fletcher Cooke and Joel Temm also exerted a strong influence.

The Indian Ocean Hotel Brett Jones Colts also finished the qualifying rounds with a bang and will take strong belief into their finals campaign under the tutelage of young coach Darcy Sparks.

They ventured out to the Swan Valley to play Swan Athletic, who occupy a position higher than them on the ladder and produced and impressive 23-point victory.

Had Swan Ath not finished with a flourish the margin would have been much wider, but just the same the Beach was content in winning 9.11 (65) to 6.6 (42).

Midfielder Campbell Francheshi was at the forefront of a ruthless performance, particularly in the first half when the opposition kicked just one goal.

The Beach lost a few soldiers in the second half, which saw some of the connection fall away, but they were still committed with the likes of Ben Tindall, Brendan Naylor, Ethan Orr-Young and Lachie McLeod leading the charge.

The GJ Osplumb E3-Grade completed a difficult season with a 4.4 (28) to 18.12 (120) loss to Coolbinia. While it was a heavy loss, Will Hooper and his charges battled against the odds for much of the year and showed great resolve in the face of adversity.