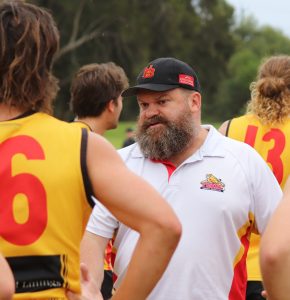 Glen Hinkley…will be on hand for the Hybrid Linings C5-Grade grand final at Gosnells.

Trying not to think about it. Every time the mind wanders and casts forward to the weekend’s footy it brings on the onset of a gut churn, tingles from feet to head.

We’ve arrived at the pointy end where one of two emotions will sweep through the bodies of the North Beach faithful. It will be ecstasy or devastation. Nothing in between. And it will be like a tsunami.

As the O’Rourke Realty A-Grade prepares for a preliminary final against Kingsway, three other teams will battle for the ultimate prize in their respective grades – a pennant. It’s hard to imagine why a small, triangular piece of cloth that has been screen printed with the word ‘Premiers” can mean so much.

But it does. Right now it’s everything. It will, should it be secured, become a charred mass in the middle of Charles Riley Reserve as is North Beach tradition on Saturday night. For now though it is a cherished and oft-elusive prize.

That post premiership action belies how precious that little flag is, but it is symbolic. Possibly signifying the release of pent-up stress. Right now, no one wants that piece of material more than those who will this weekend wear the distinctive red and yellow colours of our club.

When players embark on pre-season training – some with varying levels of commitment – this is the end goal; the opportunity to be the best in their competition. And now it is well and truly within reach.

Across the board they are all worthy of success. But we all know you don’t always get what you deserve. Especially in this game.

That’s why players will struggle to sleep tonight. Whether they are in the Beyond Tools E2-Grade grand final against Lynwood Ferndale or the A-Grade knockout final against Kingsway, to the individuals it means as much.

It is an opportunity to capitalise on at least six months of hard work. In many instances, it’s years of dedication – even a whole career of amateur football which can be vindicated on one afternoon. That’s why the butterflies flutter in the belly. Why your body tingles for them.

The sight of Glen Hinkley sitting in a wheelchair on the concourse at training last night, did nothing to quell emotions. After major surgery a month ago, he was there watching his team’s final training session of the year.

He’ll be there at Gosnells Oval tomorrow as the Hybrid Linings C5-Grade seek to capitalise on a near-perfect season against Trinity-Aquinas. North Beach legend Bill Duckworth, who steered the helm with Hinks laid up, will be there too.

The pre-cursor to the C5-Grade is the Beast Carpet Cleaning C5-Reserves, who will confront Curtin University-Wesley. Coach Jack Flynn is considerably younger than those who have directed the third grade to the grand final, but is no less passionate.

And they don’t come any more North Beach than Novak “Jesus” Smith. He has been the very definition of a “champion” of the lower grades for many years and he will direct the fifth grade assault at Richard Guelfi Reserve.

Then there is the club’s flag ship team, the A-Grade who must overcome Kingsway to earn a shot at Curtin University-Wesley in the grand final. They know it will not be easy, the two teams have met three times and the Roos have endured in the two most recent encounters.

Over the last few years, the Beach has been consistently in contention and it would be so satisfying to see Shane Paap and a handful of senior players who have committed so much to get over the Kingsway hurdle.

The senior squad has been nothing short of remarkable in the last five years and the Lifenet A-Reserves, under Scott Holbrook, will be in familiar territory next Saturday when they shoot for five successive premierships.

It would be great to have both teams on show at Steel Blue Oval, but there’s still some work to do.

Tomorrow afternoon it will nerve-racking. Hopefully the clubrooms will belt out Queen’s hit ‘We are the Champions’ and ‘Holy Grail’ by Hunters and Collectors on loop in the evening.

And deep into the night!