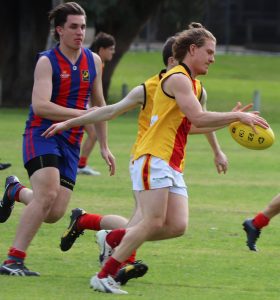 The capacity of North Beach to adapt to change was prevalent through all grades with an influx of players ensuring little resemblance between a number of finals teams from the extraordinary year of 2020.

It is normal to expect a few changes from one season to the next, but the trend across the senior teams at North Beach from 2020 into the current campaign that kicked off last weekend has been quite dramatic.

We saw it in both the O’Rourke Realty A-Grade and the Lifenet A-Reserves and it was a similar story with the Hybrid Linings C5-Grade.

As anticipated it took time for the players to connect, but once on the same wave length they were irresistible, as they carved out an impressive nine-point victory against Fremantle CBC at Morris Buzzacott Reserve.

Riley Hinkley was instrumental in the win, rucking for more than 80% of the game in warm conditions and giving his mids first use of the footy at the stoppages. Jayden Black was one to profit from this dominance, constantly winning the hard ball and feeding it out to his runners while Tim Edwards and Matt Raynor showed their class and when they won the ball their pace and skills were a cut above.

Sam Zehnder was a dangerous target up forward and remained a constant threat throughout the game while Matt Holden, playing threes due to FIFO commitments, used his big frame and aggression to continuously set up forward thrusts.

The Beast Carpet Cleaning C5-Reserves made it a rare double against CBC on their home deck with a convincing 13-point victory.

The Beach kicked four of their nine goals in the premiership quarter with an even spread of goal-kickers, the only player to hit the scoreboard on two occasions being Callum O’Shea as the Beach won 9.7 (61) to 6.6 (42).

The Beyond Tools E2-Grade and GJ Osplumb had mixed fortunes in the opening round, both games going down to the wire.

After being placed in a grade that was beyond their means last year, they enjoyed the competitive nature of both matches.

The fifths dropped off slightly in the second half against Hamersley-Carine, but found a way in the dying moments to surge and win 6.9 (45) to 5.4 (34).