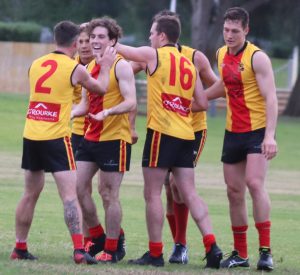 Adam Swain receives plaudits from teammates after kicking the match-winner

Charles Riley Reserve, home of North Beach Football Club, sits in something of an education hub.

To the west is Our Lady of Grace Primary School and to the north is North Beach Primary. And on Saturday, adding to that scholarly theme, we had a visit from the University Football Club.

The first lesson of the day – and in the last period as well – was spelling. And word of the day was belief.

It started with the opening bounce of the Plasterwise Phil Scott Colts and prevailed through to the final, pulsating seconds of the O’Rourke Realty A-Grade.

The colts have had some epic battles with University, won and lost some big finals against them. There have some many highs against them and some gut-wrenching lows. That’s the foundation upon which rivalries are built.

While the Beach controlled the game early, leading by a commanding 16 points at half-time, respect and experience told them that probably would not be enough.

Sure enough, the Scholars came again, but the Beach had the answers.

Through ruckman Craig Bothe they were getting first hands on the ball and the class of Lachlan Scurria, Jack McIntosh and Tai Kirkpatrick enabled the Beach to fend off their rivals on the way to a solid 11-point win – 7.7 (49) to 5.8 (38).

In addition Jackson Martino was strong off half-back, Egan Brooks committed to the contest and Kane Foley stood up at important stages. It was a classic victory and one that gives the Beach a good shot at qualifying for finals to defend their 2019 premiership.

The Lifenet A-Reserves have every reason to have a powerful course of belief flowing through their veins, having won the last three premierships and to date are unbeaten in the 2020 campaign.

At half-time on Saturday that situation was in serious peril, trailing by 13 points but significantly Uni had doubled their score – 4.2 to 2.1. It was going to take something special to reverse the trend.

Through midfielders Steve Mansfield and Connor Boylan, and wingman Tim Edwards they started to generate more opportunities, Oskar Tothill started to exert an influence in the air and Daniel Ryan continued to be a threat up forward.

But without doubt the standard bearer in defence was Ben Sweeny as bit by bit the Beach pegged back the deficit until, in a dramatic final 30 seconds, a tie-breaking behind was scored by Edwards as North Beach won 6.5 (41) to 6.4 (40).

If we thought that was enough drama for the day, the A-Grade boys found a way to trump it.

Like the A-Reserves, they struggled to get their game flowing. It came together in fits and starts, a few individuals finding a way to keep their team in the contest with acts of brilliance.

Down by five points at half time and needing goals with the breeze in the third term, valuable minutes had evaporated with little action on the scoreboard.

Adam Cockie got the ball rolling with a long-range bomb after a centre clearance and then James Garcia kicked a miracle goal from the pocket, falling onto his back. And then Sam Lamont finished the quarter with a polished set shot from about 35 metres.

A five-point lead at three-quarter time did not look enough and when trailing by nine points with about five minutes left to play, kicking against the breeze, it look almost insurmountable.

But Lamont shrugged off a tackle and brought the margin back to inside a goal with a close range conversion. The Beach won the clearance and Andrew McGuinness marked just inside 50. It would take a big kick from there, he gave it all he had but it was forced through on the goal line.

From the kick-in, Mitch Dwyer read the situation perfectly, sprinted to intercept the safe, short kick to the pocket which wasn’t so safe after all. Dwyer, who had kicked the first goal of the term through a clever snap, gathered the footy and squared it to the hot spot where he found Adam Swain.

The neat left-footer was 20 metres out, well aware of the magnitude of the moment, calmed himself and slotted the match winner.

There was still time for University to respond, but again the Beach won the ball out of the middle and it was locked in the forward for a succession of stoppages before the siren rang around the precinct to elated scenes.

The Beach remains on top of the ladder, guaranteed to play finals and with the opportunity to consolidate in the last two rounds.

Garcia was brilliant, Kyle Cranley excelled in the ruck, Lamont and Craig Hoskins were outstanding through the midfield, while Dan Leishman provided trademark run from the back half, Madoc Plane played with purpose in defence and Dwyer again personified the team’s grit.