Our Nic shines in Eagles win 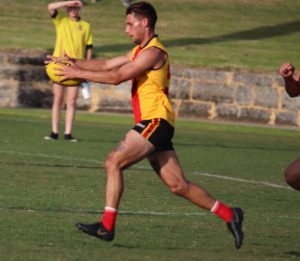 The football world locked onto East Fremantle Oval yesterday to focus on the performance of a bloke called Nic.

It was a case of the Eagles faithful tuning into the performance of athletic ruckman Nic Naitanui.

At North Beach there was a high degree of interest, even among those with no interest in the Eagles. Their attention was locked on the performance of another ‘Nic’ and they were excited by what they saw.

One of our own played a key role for the Eagles, exciting forward Nic Reid kicking four goals in his best performance at the level.

Reid – and another proud North Beach product Sam Lamont – have been a part of the Eagles inaugural WAFL squad this year and have enjoyed the opportunity. Lamont, who made his debut a fortnight earlier, could not be considered because of a calf strain.

The opportunity to play with the game’s luminaries – like Nic Naitanui, Tom Barrass and Drew Petrie – brought the best out in Reid as the Eagles romped to a 72-point victory. Reid was ubiquitous up forward, kicked two goals in both the second and third quarters, and was a factor in the triumph.

He could also have kicked a goal of the year contender had an effort in the third term not finished by crashing into the goal post.

The ball travelled to the Eagles forward 50 and Reid found himself in a one-on-two situation. He soccered the ball off the ground inside 50, got their again to sink his boot in one more time before following up and kicking it off the deck from 20 metres.

A metre to the right and it would certainly have made the 2019 highlights reel.

Reid and Lamont remain strongly connected to the Beach, both of them on hand to watch the O’Rourke Realty A-Grade team beat Trinity Aquinas by two goals.