Past joins present for Beach blockbuster 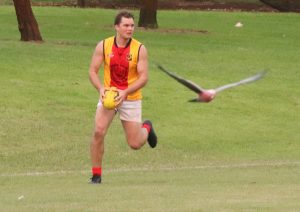 Craig Hoskins…an important player for the O’Rourke Realty A-Grade who relishes the wet.

Walking into the social hall at Charles Riley Reserve and taking a glance around the walls, there is an abundance of physical evidence of those who have created the proud North Beach history and culture.

Premiership photos from many and varied grades adorn almost every available space. Of course, there is always room for more and that is up to the current players in the 11 teams who represented our club every week.

Tomorrow, many of the people who moulded North Beach – some from the formative years, right through to the Duckworth era – will be on terraces for one of the biggest games of the season against another of the strong contenders, Trinity Aquinas.

It’s past players’ day at the Beach and they are expected in their throngs to support the O’Rourke Realty A-Grade in what looms as a tough battle with Trinity-Aquinas.

That match will be the centrepiece of the program, but there will be so much more.

It’s a Beach block-buster, with eight of the club’s teams in action on home turf through the course of the day, starting with the Project Ceilings A-Grade women and the Peak Body Fitness C4-Grade women.

The crowd will build through the day and there should be competitive matches throughout, with the Plasterwise Phil Scott Colts facing the task against Trinity Aquinas on the main oval, starting at 11 am.

We will then build into Lifenet A-Reserves, who will also be looking to extend their unbeaten sequence, against a club that has more depth than others the Beach has encountered so far this season.

The A-Grade contest should be an absorbing – and probably bruising battle – given that for the second week in succession we have an ominous forecast of heavy rain.

While the Beach is so far unbowed, the Boomers have been highly successful in recent seasons and boast some of the most talented players in the competition, so this is a match that should have the Beach players “up” for contest.

Just as it was a gritty victory a week ago against Kingsway, this match promises to be a similar style of game.

So, on a day when we celebrate the past, we also acknowledge the present and hopefully as the two come together important steps are taken in the 2021 campaign.