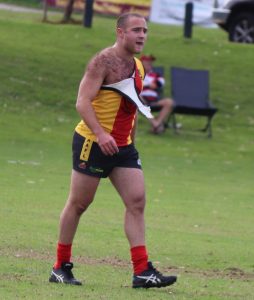 When it’s a clash between top and bottom, the team at head of the table undefeated and one at the foot winless, the result is a pretty safe bet.

The Hybrid Linings C5-Grade and the Beast Carpet Cleaning C5-Reserves teams both found themselves in that position against Baldivis. Turning up at Charles Riley Reserve would almost guarantee victory.

But this exercise was more about sticking to process and the game plan than it was about winning. About staying within the lanes and not becoming selfish. About playing the team game and remaining focused.

To that end, coaches Glen Hinkley and Jack Flynn would have been well satisfied as they dominated in kicking a combined 389 points to 39.

It was difficult to not feel a little empathy for Baldivis and kudos to them for making the long trip north in the knowledge of what they confronted. And for continuing to battle against the odds despite the challenges of the season.

The class of Matt Irvine through the midfield, combined with the grunt work of Jayden Black ensured strong supply inside the forward 50, where Mitch Cameron (10 goals) and Jordan Brooks (six) feasted on the avalanche of opportunity.

A scoreline of that lop-sided nature means the Beach won every position on the ground, with Alex Coleman outstanding in the ruck, Brayden Quinn building on his strong body of work across the season and when called upon the defence, led by Shane Duckworth, did what it needed to do.

Earlier, the C5-Reserves were even more ruthless in posting a 35.15 (222) to 2.2 (14) victory. To put that in context, with flat 20 minute quarters and no time on, they averaged a goal for about every two minutes of action.

David Purser was highly influential through the midfield, while Brendan Collins gave them first use through his exquisite ruckwork and Isaac Seidner again demonstrated his capacity to rise to higher levels.

The Beyond Tools E2-Grade faced a tough challenge against Lynwood-Ferndale and it lived up to pre-match expectations, with a tough, dour contest. Unfortunately the Beach was on the wrong side of a 6.7 (43) to 5.5 (35) scoreline, but it certainly was not through lack of effort.

The Beach rued missed opportunities, but strong contributions came from the likes of Lucas Osborne, Fletcher Cooke, who has had an exceptional season, Daniel Njegich, Paul Cavanagh and Michael Duckworth.

Unfortunately the GJ Osplumb E3-Grade found Ocean Reef too tough to crack, losing by 13 goals, while the Peak Body Fitness C4-Grade women also lost, albeit in an absorbing contest to Swan Athletic.

And the Grange Residential Integrated Rules suffered a heart-breaker against Warnbro Swans, going down 4.6 (30) to 3.9 (27).