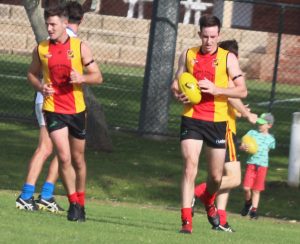 It has been a rough year for the GJ Osplumb E3-Grade. Numbers have been thin and being at the bottom of the player chain, no one gets hit harder than the sixth grade.

A couple of injuries in A-Grade and the knock-on effect jars all the way down the grades, coming to a grinding halt, like a trailer stripped of its tyres at the 6s.

But persistence – with a dose creativity and a little persuasion – paid off last Saturday.

Light on for numbers again, coach Will Hooper was racking his brain trying to find a solution as he looked to field a team. A conversation with club legend Bill Duckworth and a few phone calls later, the problem was solved.

A number of former A-Grade premiership heroes, who enjoyed success under Duckworth, as well as major sponsor Jarrod O’Rourke and the cavalry arrived. Plucked from retirement.

Greg Pires, Josh McGinnity and Luke Smith were among others to answer the call as the Beach scored a powerful victory over Brentwood Booragoon to sing the song for the first time this season.

Those senior players were not annexed from the retirement village exactly, they had been playing AFL 9s with the North Beach Pups, but their class was a welcome addition. They were influential from the outset, with Pires producing a best-on-ground effort and McGinnity banging on five goals.

In addition, Jarrad Krammer imposed himself from the outset while stalwart Peter Panagopoulos, Arnup and Andrich were also important. Sixth grade legend Troy Gurney was retired through injury but enjoyed belting out the song one last time.

Meanwhile, the Beyond Tools E2-Grade won an important contest against Hamersley-Carine to move into third position courtesy of their 12.6 (78) to 9.7 (61) victory.

The Hybrid Linings C5-Grade survived a strong first half challenge from Fremantle CBC before powering away in the last 40 minutes to maintain their unblemished record.

Alex Thompson again led the midfield recovery and was reaping the benefits of Michael Schofield and Alex Coleman dominating in the ruck.

Luke Hopkins moved out of his customary role in defence to play through the middle and did an outstanding job in shutting down CBC’s prime mover.

Matt Irvine and Matt Seaton changed roles in the second half and became very influential and up front, Mitch Cameron continued his great form with another four goals.

After a tug-o-war in the first encounter of the season, the Beach set the tone for this match early and never relented.

The Beach beat them in the pressure game which allowed the team to attack at will, and that was led by Ben McAuliffe who had a big influence with his assault on the ball. Apart from a bit of inaccuracy in front of goal this was a really strong performance by the team, considering CBC were comfortably the third best side in the competition.

The Indian Ocean Hotel Brett Jones made a strong run to the line against Trinity Aquinas, but the damage was done in the first half. Down by 40 points at the main break, North Beach held the Boomers to just one second half goal.

It proved a bridge too far, despite a solid recovery led by the likes of Kai Johns, Jake Moreschini and James O’Malley. They lost 10.8 (68) to 8.5 (53), a commendable performance under rookie coach Darcy Sparks.

The Grange Residential I-Grade capped a solid day for the club with an impressive 20-point win over the Kelmscott Bulldogs, 4.9 (33) to 2.1.

The Bulldogs might have left without the points, but they were delighted to don a new set of jumpers and certainly looked a classy outfit.

Congratulations to coach Peter Panagopoulos and his wonderful team on consecutive victories.