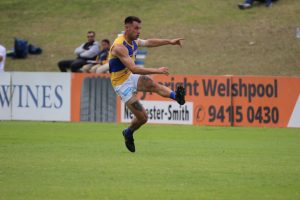 The pathway to elite football can take varied routes, but few have taken more detours on the journey than North Beach favourite Nic Reid.

The mercurial forward, who has long excited the Beach faithful on the Charles Riley Reserve terraces, this week was elevated to elite ranks when he was formally promoted to the West Coast Eagles rookie list.

Reid, who joined the Eagles last year, to play with the club’s WAFL team, turned heads with his performances in the second tier competition and had been working on recovering from a shoulder reconstruction since November.

He has slowly built towards full training and is hopeful of being ready for the start of the WAFL season.

Reid and former Geelong rookie Jamaine Jones were today confirmed as SSP (supplementary selection period) players and both now get their opportunity as rookies in 2020.

Reid, 24, a State under-age representative played 15 games and kicked 23 goals in his maiden season with the WAFL Eagles, impressing the club’s recruiting and coaching staff with his all-round ability.

He played State under-15s and under-16s with the likes of Jack Martin, Jamie Cripps, Dom Sheed and Jesse Hogan but missed the State 18s championship with the shoulder injury that eventually required major surgery during this off-season.

The journey of Reid to the highest level should offer further hope to mature players in community competitions, serving as notice that dreams can be arealised in the most unconventional of ways.

Reid, who played with both the North Beach senior and junior clubs, did have a couple stints at Claremont, but preferred to play with his mates.

He joins another North Beach junior product, Callum Jamieson, on the Eagles list. Jamieson, a 200cm forward-ruckman, has also made a strong impression in his first pre-season after being drafted in November.

Reid will view his elevation to the Eagles list as the start of his dream, rather than the end.