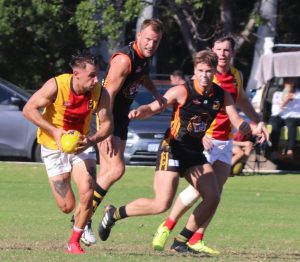 Favourite son Nic Reid will return to action with the North Beach O’Rourke Realty A-Grade as it searches to add to its strong start to the year in a twilight game against Wembley at Pat Goodridge Reserve tomorrow.

Reid, who spent two years in the West Coast Eagles system – initially with the WAFL Eagles in 2019 and then on the club’s senior list in 2020 – has returned to the Beach this year.

The inclusion of Reid, who played three AFL matches last year, has been a highly-anticipated event and had the club buzzing last night.

This clash with Wembley, the only team promoted from B-Grade after the truncated COVID season of 2020, will start at 4.10pm. Wembley beat West Coast Cowan in the B-Grade grand final last season and are expected to make a strong challenge.

The Lifenet A-Reserves and Plasterwise Phil Scott Colts will also play at Wembley’s home base, while all of the other teams representing the Beach will play at Charles Riley Reserve.

A full day of football will culminate with the Grange Residential I-Grade playing their first match of the season, with a 4.30pm start against Fremantle CBC.

The club’s women’s teams will kick of their 2021 campaign next week, which will mean all 11 teams will finally be in action.