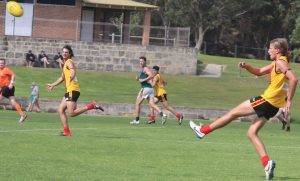 Oskar Tothill…poised to debut against Wanneroo

A favourite son will resume and an emerging star will get his first opportunity at senior level as North Beach prepares for the honour of hosting a match to commemorate the ANZAC tradition at Charles Riley Reserve on Saturday.

In recent years, the club has been privileged to play at home on the Saturday closest to April 25 to honour those who paid the ultimate price in allowing us to live as we do today.

And the return of classy forward Nic Reid on the day young utility player Oskar Tothill makes his senior debut will add to the occasion.

Before the start of Saturday’s round three clash against Wanneroo the club will create a pre-game ceremony that promises to live up to previous events.

The club will also host members of the North Beach RSL as the O’Rourke Realty A-Grade team strives to continue an unblemished start to the season.

After despatching 2018 finalists Trinity Aquinas and University ahead of the Easter bye, the Beach will be looking to consolidate against the Roos.

The Beach will have a handful of changes, some forced through injury, others created by form and availability of senior players.

Tothill, who has won consecutive fairest and best awards in the WAAFL Colts competition (Brett Jones in 2017 and Phil Scott in 2018), has been elevated to make his A-Grade debut on the back of two solid efforts with the A-Reserves.

Experienced utility player Blake Piggott comes in for his first game for the club after being unavailable for the opening two games because of work commitments.

Long-serving defender Ben Sweeny has earned promotion after two outstanding games in the reserves, while Reid and Andrew McGuinness return.

McGuinness was unavailable because of work commitments last week, while Reid, who has been signed by the West Coast Eagles’ WAFL team, will resume from injury to play his first game of the year.

The Lifenet A-Reserves (12.20pm), also undefeated after two rounds, and the Plasterwise Phil Scott Colts (10.25am), will both start 15 minutes earlier to allow time for the pre-game ceremony ahead of the senior clash.

The reserves have started the season strongly and play a Wanneroo team that has struggled in the opening rounds while the Phil Scott  Colts will be aiming to return to the winners’ circle after mixed results in the first two games.

The Hybrid Linings D1-Grade and the Coast to Coast Imports D1-Reserves will both travel to Wanneroo Showgrounds, while the Indian Ocean Hotel Brett Jones Colts will look tyo open their account against Collegians at Dalkeith Oval.

The Beyond Tools E1-Grade play West Coast at City Beach Oval and the GJ Osplumb E3-Grade play Piara Waters on their home deck.

The Galleria Toyota A-Grade women start their season at Rossmoyne while the Grange Residential Integrated Rules team will play their first home game of the season.