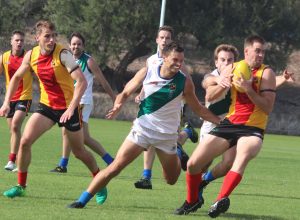 The rivalry with close neighbour Scarborough will be re-ignited when the O’Rourke Realty A-Grade plays the reigning premiers at Millington Reserve tomorrow.

A competitive intensity, stretching back to the mid-90s, has been elevated since the Sea Eagles returned to A-Grade a few years ago.

They were convincing winners of the 2018 premiership, a team dripping with experience at senior WAFL level, mainly from former Subiaco players, carried too much firepower for Fremantle CBC in the grand final.

Tomorrow, the Beach takes on Scarborough in an intriguing battle. Both – along with CBC – are undefeated after three rounds. Form lines are difficult to read, but winning form is good form so both are clearly in fine fettle.

North Beach is coming off a soft 100-point win against Wanneroo, a game that marked the return of Nic Reid to the senior team after suffering a couple of unfortunate injuries while training and playing with the West Coast Eagles WAFL team.

Sam Lamont, also a member of that West Coast squad, will resume with North Beach after an ankle injury sustained in the opening round against Trinity Aquinas.

The senior squad is humming at the moment, with the Lifenet A-Reserves also undefeated after three rounds, so competition for places in the A-Grade team is intense. This will unquestionably represent the biggest challenge of the season but the Tigers are looking forward to it.

To secure victory, the Beach will need midfield leaders like Mitch Gill, Blake Piggott, Lamont and Beau Witheridge to wield a strong influence. If they can channel the ball into the attacking 50 arc often enough there is scoring potency in abundance.

Ryan Ekert, Mitch Cameron and Dylan Campbell have all hit the scoreboard hard in recent weeks.

The A-Reserves, with a percentage of 742, have made a remarkable start to the year and will be looking to consolidate that platform against Scarborough. They won be a remarkable 173 points against Wanneroo and will enjoy a more competitive hit-out.

In what has been an extraordinary opening month, taking into account the bye at Easter, none of the club’s four most senior teams have tasted defeat. The unconquered Hybrid Linings D1-Grade and the Coast to Coast Imports D1-Reserves both have a bye this week, so that will not change for them.

The Plasterwise Phil Scott Colts will kick off proceedings at Millington in what looms as another interesting battle.

While Scarborough has not yet won a game, they will be tough to crack, their draw in the underage competition representing a tough start to the year.

While all of that action will play out at Scarborough’s home ground, four other matches involving North Beach teams will be on show at Charles Riley Reserve.

The Indi Bar Brett Jones Colts will get things rolling at 10.40am against Trinity Aquinas while the Galleria Toyota A-Grade women will play Quinns District at 11am, looking to consolidate their opening round victory.

The Beyond Tools E1-Grade will play host to Scarborough while the GJ Osplumb E3-Grade will confront Warnbro Swans.