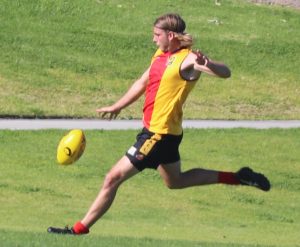 All most people see when they cast an eye across a game involving the O’Rourke Realty A-Grade team, is the distinctive red and yellow guernsey.

And their expectations of those wearing the senior strip is that they represent North Beach with customary pride.

What they don’t see is the players who are not there. That’s fair enough, games are not won by blokes in the stands, only those on the field. But there has been a number of significant absences in recent weeks.

While there has been the upside of seeing some exciting young players get an opportunity, there has been a knock-on effect and the club’s lower grades have done a remarkable job to absorb the strain that has put on their own resources.

Despite a lengthy list of players who have been unavailable, the club remains in finals contention in every grade – from the undefeated Lifenet A-Reserves, to the Galleria Toyota A-Grade women and the GJ Osplumb E3-Grade.

The A-Reserves, who have won the last two premierships under Scott Holbrook, again carried too much class for Scarborough on the weekend.

They opened brilliantly, effectively putting the game to bed in the opening term when they kicked five goals to none.

With Ben Johnson a focal point in attack with six goals, Matt Raynor leading the defence and Nick Bowe and Josh Stott dominating through the midfield, the Beach carried too much firepower and won 11.10 (76) to 2.7 (19).

The Plasterwise Phil Scott Colts saw off the Sea Eagles with a commanding display and hekld sway throughout an entertaining contest.

Chris Wells in attack, Madoc Plane in defence and the likes of Sebastian Passmore-Bush and Connor Hingston worked hard through the midfield as the Beach won 7.9 (51) to 4.2 (26).

The Indi Bar Brett Jones Colts continued to build momentum into their season with a convincing 56-point triumph over Trinity Aquinas.

Lucas Osborne was lively up forward, while Mitch Tobin, Michael Fullarton and Alex Thompson were outstanding.

The Hybrid Linings D1-Grade, having dictated terms for most of the game, found themselves in the position of having to stave of Trinity-Aquinas in an absorbing battle on Charles Riley (2).

The Beach did not get maximum return for having the better of the contest and required resilience from Callan Dunjey, Jacob Desmond and Alex Coleman to edge to a 6.4 (40) to 3.11 (29) win.

Curtis Hogg, Jerome Orr-Young, Brendan Viney and Hayden Pow, with three goals, had a strong influence over the outcome.

The Beyond Tools E1-Grade, hit hard by the player drain, to the extent that coach Novak Smith returned early from injury, were brave, but ultimately fell short against Scarborough.

Michael Dodd, who suffered a heavy hit late in the game, was outstanding while Rob McComiskie and Mark Sadler were also strong contributors.

The GJ Osplumb E3-Grade, after a dominant first half, held of SNESA to win by 25 points.

The day started with a tense clash, the Galleria Toyota A-Grade women suffering a narrow defeat at the hands of Cottesloe, who won their first game of the season.

North Beach failed to kick a goal, losing 0.5 to 1.3 in a match that could have gone either way. The ultra-consistent Sarah Cosoleto was under constant notice, Hannah Campbell and Taylisha Brown were strong in defence and Tessa Anderson and Sally Ford were ubiquitous through the middle.