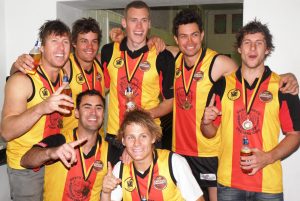 The energy has been sucked out of the football season by this horrendous Covid-19 pandemic, but the enthusiasm of the North Beach army remains intact.

Rather than wasting this period of isolation, North Beach stalwart Neil Savage is a man on a mission. He is busily acquiring significant North Beach memorabilia as the club begins to plan for its 60th anniversary in 2024.

It has so far been a storied history and doubtless the next three seasons – including this one, of and when it kicks into life – will provide even more fodder.

A club that had its early battles finding a foothold in the northern suburbs is now the biggest amateur club in the country and before the Coronavirus hit, was looking to expand to 11 teams in 2020.

While we are treading water in that respect – awaiting direction from State and Commonwealth health authorities – the club is far from dormant.

And Savage is leading the way. An integral part of the club’s history – both a life member of North Beach (1994) and of the WA Amateur Football League – he is reaching out to those involved in the Beach over the last 60 years to help build the club’s collection.

He plans to digitise the images, reports and newspaper cuttings he compiles so they can be displayed at a screen at the club when operations return to normal.