Scurria to debut against rivals 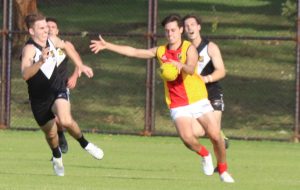 Lachlan Scurria will make his first senior appearance against Scarborough.

Rewards for commitment and form continued at the selection table last night when another emerging youngster, Lachlan Scurria, was selected to make his debut for the O’Rourke Realty A-Grade against Scarborough tomorrow.

The re-match of last year’s grand finalists will see a bumper crowd at Charles Riley Reserve and it promises to be an enthralling battle.

Scurria is one of a handful of club debutants, coming in to replace another rookie who has had his first taste of senior football, Caolan O’Connell, who was not available for this match against our nearest and most fierce competitor.

Sometimes the genesis is a specific moment in time, but generally it grows and builds. The North Beach-Scarborough rivalry has existed for decades, more than half of the life time of our football club.

There is nothing false or contrived in how one club feels about the other and it’s why the home game against the Sea Eagles is one of the biggest days every season.

Having had the misfortune of the annual ANZAC Day being cancelled because of a COVID lock-down imposed the Premier, this match should comfortably attract the biggest crowd of the season to date.

The extra mayonnaise on this mouth-watering contest is that the last time the two clubs met it was in last year’s grand final. Unfortunately that result went the way of the opposition, so the Beach will be keen to reverse the outcome.

There is never atonement for a grand final loss. That premiership has been and gone; you don’t get to exact revenge.

What you do get, is the opportunity in a game like this, to set your club for another serious tilt. If victory can be achieved against a major contender, then it is possible to take a quantum leap forward on the premiership table.

While Scarborough won the 2020 grand final, this O’Rourke Realty A-Grade North Beach team will have a vastly different look to it than the one that played at Steel Blue Oval last season.

Tom Hooper and Nic Reid have returned, a few emerging players have been elevated to senior ranks and there are a several other fresh faces in the line-up – including Hamish Coulton, James Canty, Shannon Lucassen and Dylan Brockbernd.

The club is looking forward to testing itself against the reigning premier.

At this stage the North Beach outfit is unbeaten, but Scarborough does represent a more significant challenge than the Tigers have encountered in the three matches played to date.

The Lifenet A-Reserves are also unbeaten and look likely to be even stronger with a number of senior players poised to return after injuries during the pre-season build-up. A feature of this game will be the 100th game for popular midfielder Nic Bowe.

The Plasterwise Phil Scott Colts will be looking to rebound after being overwhelmed in the second half by Fremantle CBC last Saturday.

On a big day for the club the undefeated third and fourth grade teams – the Hybrid Linings C5-Grade and the Beast Carpet Cleaning C5-Reserves – will play Wanneroo on the northern oval.

In addition, the Project Ceilings A-Grade women will kick off proceedings at 9.30am on the main oval while the Grange Residential Integrated Rules will begin the action on the northern oval at 11am.

So the club will have seven teams playing at homes with the exceptions being the Indian Ocean Hotel Brett Jones Colts playing at Wanneroo, the Peak Body C4-Grade women venturing to Warnbro, the Beyond Tools E2-Grade playing in Melville and the GJ Osplumb E3-Grade playing at Ballajura.