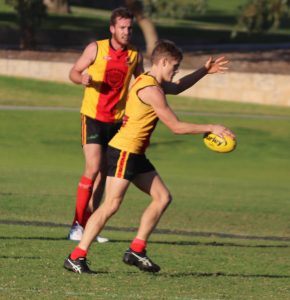 Respect at a football club is hard-earned. Traditionally it’s a tough school, with harsh markers.

Sometimes it is more easily won within the fabric of a team than across an entire organisation.

But utter the name of Mitch Dwyer around the hallowed halls of the North Beach Football Club and there is a universal nod of approval. Not just because of the way he plays the game, but because of the person within.

Tomorrow, when the O’Rourke Realty North Beach A-Grade plays Kingsley at Charles Riley Reserve, the tenacious midfielder-forward will play his 150th game for the club. If there is any justice, if there is any reason for his teammates to find inspiration, then they need only look at the bloke wearing #4.

There are others within the club that command the same level of respect as Dwyer, none exceed it.

On-field he is as tough as they come. Committed to the contest, never leaving anything on the ground. He bleeds North Beach, both figuratively and physically. In fact, if his surname was Selwood no one would question it.

Dwyer has a habit of finishing games with a bandage around his head to stem the flow of blood from a wound, as consistently as the Selwood brothers have been wrapped up in the AFL over the last 15 years.

While he could expend no more energy on the field, this wonderful North Beach warrior has also been pivotal off it. An intrinsic part of the senior leadership group carrying forward an outstanding culture and educating the next generation on what it means to be a part of it.

The skipper embodies everything for which the club stands.

His milestone will add extra significance to a day when the Tigers will be looking to rebound after suffering its first loss of the season against reigning premiers Scarborough.

Shane Paap and his boys understand the magnitude of the task ahead with Kingsley, having earned elevation to A-Grade this season, playing strongly in the first month of the season. The Cats have split their matches with two wins and two losses, including a thrilling one-point victory against University last week.

With that in mind and just one place between North Beach (fourth) and Kingsley (fifth) it promises to be an enthralling battle.

Both clubs have contributed players to the expansion West Coast Eagles WAFL team and their respective representatives have had a strong impact, Beach midfielder Sam Lamont and forward Nic Reid along with Cats pair Andrew Fisher and Alexander Coe.

So impressive has Fisher been that he has been included in the Eagles WAFL leadership group.

The Beach will be hoping its depth will carry it past Kingsley in this battle, with the only loss for any of the club’s top four senior men’s teams – and its women’s side – coming in an 11-point defeat at the hands of Scarborough.

It boasts an even blend of experience and youth, with one of the club’s 2019 debutants, Oskar Tothill enjoying good form, along with Ned Halley and Liam Catalfamo.

Along with the experienced heads of Matt Irvine, Dwyer, Michael Taylor and Kyle Cranley, the Beach will be looking to advance further up the ladder.

While the A-Grade team will be looking to return to its winning form, the Lifenet A-Reserves will aim to consolidate an amazing start to the season.

They have chalked up consecutive 100-point wins in an unblemished start to the season, illustrating once more the depth of talent at the club. They will kick off proceedings at Royal Charles Riley Reserve with the Plastwerwise Phil Scott Colts playing the first night match tonight.

The Hybrid Linings D1-Grade and the Coast to Coast Imports D1-Reserve will resume after a week’s hiatus with matches against Whitford at neighbouring MacDonald Reserve, while the Indi Bar Brett Jones Colts will play Cockburn Lakes in the southern suburbs.

The Beyond Tools E1-Grade clash with Coolbellup at Tempest Park, with the GJ Osplumb E3-Grade, fresh from their first win of the season, will travel to platy Swan Valley.