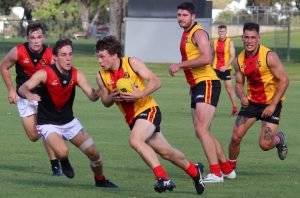 Gung-ho midfielder Sam Lamont and athletic forward Ryan Ekert have been  selected in the team in a game starting at 8pm – the most significant game played under the newly-installed lights.

There is a hiatus across the competition for the long weekend, but both Ekert, who will play his second representative match, and Lamont will relish the opportunity to pull on the iconic black swan guernsey.

In the lead-up to the main game, the State colts will also play the State country team, starting at 6pm. It looms as a balmy evening, so North Beach supporters are expected to be there in big numbers.

Ekert won his way into the team with a four-goal haul against Kingsway last Saturday while Lamont has this year been a part of the West Coast Eagles WAFL list. He has so far been denied an opportunity at the next level because of an ankle injury, but will be looking to advance his prospects by stringing some games together.

He has been listed as an emergency for the WAFL Eagles in the past two weeks.