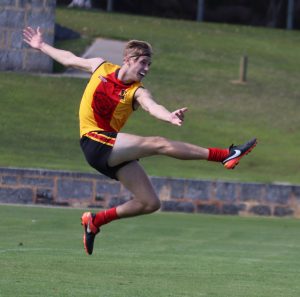 It’s how we reference those teams and players who are not ensconced in the club’s flagship team. But anyone who has seen the individuals and the quality of their football would suggest we need to redefine the terminology.

The class of the players and the style of football is anything but low grade.

That’s especially so in the Hybrid Linings D1-Grade and the Coast to Coast Imports D1-Reserves who went into last Saturday’s round seven matches unbowed. They confronted other unbeaten teams from University.

The thirds suffered their first defeat of the season against the Scholars, who have won the past two premierships at this level, but if the radar in front of goals had been working, the outcome could well have been different .

North Beach stormed out of the blocks and had the first two goals through centre half-forward Riley Hinkley, who is slowly recapturing his 2018 form. Ryan Hart kicked a terrific crumbing goal to extend the lead but as expected, University responded and there was just three points in it at the first break.

From that moment, the Beach let themselves down. Despite having greater possession, they scored 2.9 in the final three quarters, effectively kicking themselves out of the contest. They matched University in every other facet of the game but where the Beach missed, Uni took their opportunities – evidenced by the fact that despite having one more scoring shot they lost by four goals.

Nic Wells was silky smooth and was voted best afield by his peers while Adam Swain worked tirelessly around the packs, Liam Pardini and Craig Hall continued their outstanding form, while Jacob Desmond is building on a slow start to the season.

Dean Wilson, as his trademark, led the way with his contested possessions while Tyler Hurley was a rock in defence and Rhiordon Hughes kicked three goals to lead the way up forward.

The Indi Bar Brett Jones Colts made a number of changes leading into the match against Wesley Curtin, exceeding more than 50 players who have pulled on the North Beach jumper for the second colts team this year.

In a testament to the depth of the squad, the Tigers put on a four-quarter clinic to ease into second place on the ladder. A standout four-goal first quarter from Mason Rollo got the boys going early before Josh Artaud bobbed up with three in the second.

The North Beach defence, led by elite ball use from Mark Craig, continued their solid run of form, repeatedly repelling everything Wesley could throw at them.

Ben Coghlan was a clearance animal in the guts and ensured the Beach forwards had plenty of supply. They have now won five on the trot heading into the bye and are keen to resume after the mid-season break.

The volume of talent within the club was further illustrated by the Beyond Tools E1-Grade proving too strong for Kingsway.

Michael Bramley capitalised on a dominant midfield with seven goals, while Ryan Staniforth and Jay Allison-Green ensured a flood of supply while Riley Duncan and Sam Cahill were also outstanding.

The Beach started strongly, with the likes of Jake Marchin-Vincent, Tim Harewood and Julian Gomez setting the standard while Michael Humphrey was a force in the ruck, with Steven Clark and Mitch Clarke also influential.

Josh Veroni, Tim Elphick and Tim Harewood, a first year player given the responsibility of playing centre half-forward, led a response when the Beach drifted away from their focus and the Cougars pounced.

Mason Procak was also influential throughout and helped steer the Beach to an important victory.