The ecstasy and pain of finals 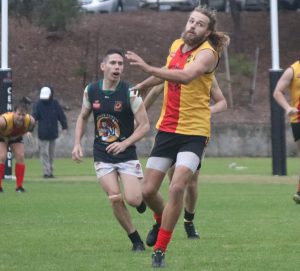 The higher stakes of finals football are matched by the emotions of victory and defeat.

The ecstasy of victory carries spirits and energy through the roof; the despair of losing crashes them through the floor.

Unfortunately for the Hybrid Linings C5-Grade and the Coast to Coast Imports C5-Reserves, they felt the kick of both feelings last Saturday.

The C5-Reserves won a pulsating preliminary final victory over University, driving scenes of sheer joy post-match. A couple of hours later and the vibe could not have been more stark when the C5-Grade dipped out of the competition after a gripping loss to North Fremantle.

Just a few weeks earlier, in the regular season, the C5-Reserves fell to a slick University outfit at McGillivray Oval and with a couple of key injuries to regular defenders, first-year coach Jack Flynn was a little concerned.

But he need not have worried. As a collective, the team covered for the deficiencies and did not allow University’s key forwards to impact the game and scored an impressive 21-point victory – 8.10 (48) to 5.7 (37).

Midfielder Jack Steel, rewarded for a stellar season by winning the competition medal on Wednesday night, led the charge, along with Corey Jennis and Ryan O’Donoghue who were asked to play the key defensive posts.

After an even first half, the Beach exploded in the all-important third quarter on the back of further strong contributions from Caleb Davis, Joel Brown, Matthew Morrison and Nathan Adler, who provided a focal point up forward and kicked three goals.

For the C5-Grade, the loss to North Fremantle was tough to take. They had their chances, but were not quite as adept at capitalising on those opportunities as they would have liked, the end result being a nine-point loss – 7.6 (48) to 9.3 (57).

Again the Beach held sway in a tight first half, but the Maggies dominated the third quarter with the breeze, rattling on a game breaking five goals.

After losing to North Fremantle by just three points a fortnight earlier, coach Glen Hinkley targeted a handful of key opposition players that were influential in that first meeting. And that plan worked – none of those individuals had an influence on the contest.

However, with the Magpies having just one senior side in the finals, and with eight changes to the side they fielded in the previous encounter, other players who escaped the pre-game planning impacted the game.

In the end it was just 12 minutes of football in the third quarter that proved costly.

The Beach were brave and never relented, but they found an opposition who were better on the day.

Importantly, looking forward, two players with a big future at the club, Jamie Bennett and Blake Sawyer, were among the best for the Beach.