The 1990 season provided another remarkable chapter in the history of the North Beach Football Club.

It was special because the club backed up its inaugural A-Grade premiership by capturing back-to-back titles. If the 1989 flag announced the Beach as a genuine A-Grade team, this triumph emphasised the capacity of the club to become a competition powerhouse.

Again coached by West Perth champion Corry Bewick, the Beach proved too strong for Wembley in the grand final.

It was a team studded with stars – Bruce Stewart, who won the fairest and best award, Gary Tait, who did so much to put the club on the map, Paul Bistrup, Michael Hoskins (whose son Craig is at the club this season), Paul Higgins, Geoff Valentine (current West Perth coach), Tony Tomizzi…the list goes on.

But perhaps even more notable was the fact this flag was won in a reverse strip! The red and yellow features on the iconic guernsey were transposed and when they arrived within weeks of the season opener, it was too late to do anything about it.

In the Grand Final the Beach blew the game open with a seven-goal second term and boasting the class at their disposal they were  never going to relinquish their stranglehold from that point forward, eventually claiming an authorative  35-point triumph.

Below is Corry Bewick’s summation of the season: 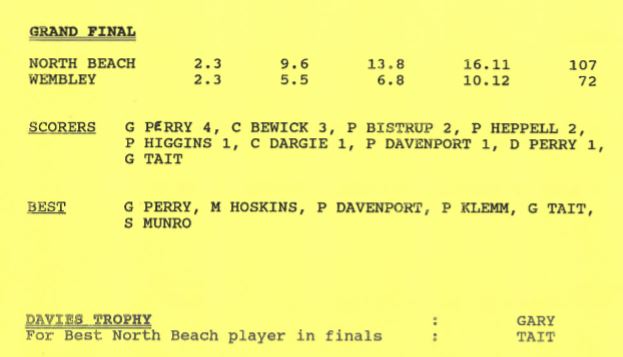