Thirds go to bye on a high 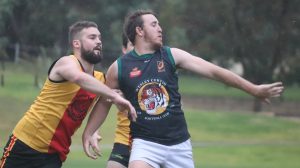 If Glen Hinkley, coach of the Hybrid Linings C5-Grade could nominate the time in the season when his team would take the bye that is a part of their competition, he might have suggested this as the ideal week.

After closing out the first five rounds with a strong victory over Curtin University-Wesley, the Beach third-grade team sits undefeated at the top of the table.

They get the chance to hit the re-set button after carving out a solid 16-point victory, the margin not exactly reflective of the control they enjoyed. So Hinkley’s boys will freshen up at the mid-point of the season and re-launch after having a weekend off.

The Beach, with several new faces in the line-up, was challenged by Wesley and lacked a little chemistry initially but eventually got things going in the second half – the performance marred only by inaccuracy.

The Coast to Coast Imports C5-Reserves also go into the break on top of the ladder, albeit having lowered their colours to second placed Wesley, who have a game in hand, on the weekend.

The season continues to throw up insurmountable challenges for the Beyond Tools C4-Grade, playing Rossmoyne at Shelley Park on the weekend and again confronting the opposition’s senior side.

The North Beach fifths competed well, but understandably were out-gunned and lost by 20 goals.

It was a similar story for the GJ Osplumb C5-Reserves who were beaten by seven goals. Again they never, at any point, put the cue in the rack but simply could not match the class of the opposition.