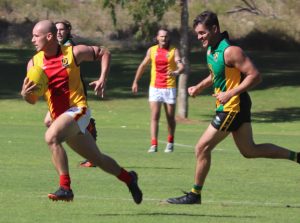 Two of the most popular figures at North Beach were last honoured as part of the annual Perth Football League presentation night.

Midfielders Nick Bowe (Lifenet A-Reserves) and Craig Hall (Hybrid Linings D1-Grade) both won fairest and best awards in their respective grades, their achievements announced in  front of 1000 people at a gala event at Crown.

It is no coincidence with Bowe and Hall driving the standards that their teams both won through to their respective grand finals last weekend.

The A-Reserves won a gripping, hard-fought second semi-final contest against University, while Hall was in the thick of an energised last quarter drive to victory against CBC Fremantle in the preliminary final.

The A-Reserves have earned the right to a weekend off while the D1-Grade will play University in the grand final at Wanneroo Showgrounds.