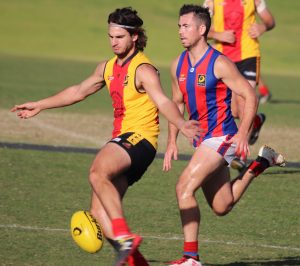 Consolidation will be foremost in the minds of the North Beach O’Rourke Realty A-Grade team when they travel to Pat Goodridge Reserve for a twilight show-down with Wembley tomorrow.

The Beach has beaten the teams that it should so far, but Wembley represent a dangerous foe and one that has had a habit of pushing the Tigers to their limits.

North Beach goes into the game without Nic Reid, who played for the WAFL Eagles on Thursday night against East Perth, but have the depth of talent to get the job done.

One of the features of their 4-1 start to the season has been the even spread of contributors in most games and that has been the catalyst for currently sitting in third position, equal on points with North Fremantle and Fremantle CBC behind the undefeated Scarborough.

Senior coach Shane Paap will again look to team leaders like Mitch Dwyer, Kyle Cranley, Michael Taylor, Beau Witheridge and Luke Symonds to set the standard, while those around them will follow the lead.

It has been an exciting start to the season, but the importance of consolidating a top three position is paramount. It is a game the Beach should win, but that will not happen without the right mental approach.

The Lifenet A-Reserves have been faultless in the opening five rounds, evidenced by a percentage of 1043, and they should again carry too much class for the Magpies.

Wembley have won just one match this season, in the opening game against Kingsway.

The depth of talent within the Beach ranks would suggest they will again get the job done and the challenge for coach Scott Holbrook will be to ensure the players remain tuned in to the game plan and to play team football.

To date they have remained focused and have not deviated from the game plan, hence three successive 100 point-plus victories – including two complete shutouts where Wanneroo and Kingsley have failed to score.

A number of players are pushing for an opportunity and they will look to continue their form as they search for higher honours.

Like the A-Reserves, the Plasterwise Phil Scott Colts tackle a Wembley team that has achieved a solitary victory in the first five rounds.

While the Beach has lost just one game, it also drew with Scarborough a few weeks ago, and is sitting in fifth position. The form of the colts has been patchy, so there is plenty of upside and they can expect a challenge from the Magpies.

Six teams at home
All of the A-Grade teams will have later starts at Wembley, but there will be plenty of action at Charles Riley Reserve, with six teams playing at the home of the Beach.

The all-conquering Hybrid Linings D1-Grade will provide an abundance of entertainment and optimism around the next wave of talent when they play Mt Lawley.

Unbeaten at this stage, the Beach boasts a neat mix of youth and experience and it would be worth the North Beach faithful heading down for a glimpse.

The Coast to Coast Imports D1-Reserves will also host the Hawks and they, too, have not yet been beaten under the direction of Chris Humphrey.

The Indi Bar Brett Jones Colts, after a tough start to the season, are now rolling along for Joel Gray and they face a significant challenge against University to open proceedings on the main oval.

On Charles Riley 2, the Galleria Toyota A-Grade women will gain a better sense of where they stand when they, too, face the challenge of confronting University.

The North Beach women have taken all before them in the opening three rounds and have a percentage of 1200 while the Scholars are also unbeaten. It should be an absorbing battle.

The GJ Osplumb E3-Grade have found touch in the last couple of weeks and they will follow the women into battle, with the Beyond Tools E1-Grade rounding out action on the northern oval.