Uni deal with off cue Beach 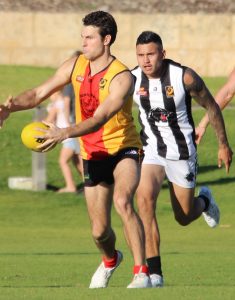 Luke Symonds was a solid performer in a disappointing loss for the O’Rourke Realty A-Grade.

Timing is everything, they say.

And for the O’Rourke Realty A-Grade team running into University, arguably in the hottest form of any team in the competition, last Saturday was far from an ideal alignment of the planets.

The Scholars had Matt Davies and Nicholas Winmar in great touch and their vast WAFL experience was a key factor in University hammering home the advantage on the way to a resounding 71-point victory – 15.10 (100) to 4.5 (29).

The Beach were on the back foot from the outset and although they worked hard they found it difficult to counter the class of the opposition.

Luke Symonds was resolute in defence, Andrew McGuinness was workmanlike in attack, kicking two goals, and Dylan Campbell gave all he had, but it was a battle against the odds.

With a number of players unavailable through injury and taking advantage of the University break, the club’s depth was tested.

Despite the player drain, the Lifenet A-Reserves held off a fast-finishing University to maintain their unbeaten run of 11 wins from 11 matches.

The Plasterwise Phil Scott Colts faced the sternest test available in the under age competition and despite leaving without four points, would have been buoyed by the performance.

The Beach had the better of the balance of play in the first half, but did not take advantage of their control and eventually University responded and scored heavily in the last quarter on the way to winning 9.5 (59) to 6.4 (40).

Scores were level at three-quarter time, but four goals to one in the last term sealed the result.

Jack Davidson and Jack Merson set the standard, particularly in the early going, while Judd Clinch and Connor Boylan also led from the front and Caiden Eaton continued his good form up forward.