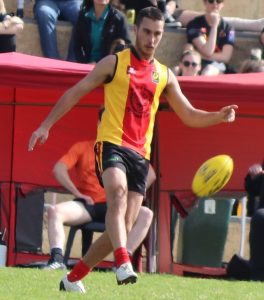 Finals footy is rarely aesthetically pleasing. It’s about getting the job done, rather than worrying about smooth transition and precise skill execution.

It’s usually about winning the contested footy, edging the ball forward in any way possible. And then finding a way to finish off the grunt work.

There has been no better example of doing what’s needed than the Lifenet A-Reserves who last week advanced to their fifth successive grand final in what could be best termed the archetypal grinding victory.

The prevailing conditions, strong, squalling winds and sleeting rain made for an unpleasant environment, but that did nothing to dampen the enthusiasm of the Beach as they endured 2.6 (18) to 1.9 (15) against University.

It was never going to be pretty, but the result certainly was in what was a mature and determined performance.

Seasoned campaigners like Nic Bowe, Jarrod Chapman and Ben Sweeny were catalysts in the workmanlike performance while Conor Boylan, Josh Chapman and Travis Burton were at the other end of spectrum and showed the future of the club is in good hands.

The Coast to Coast Imports C5-Grade ran into a quality Curtin University-Wesley outfit in their grand final and found them difficult to counter, losing 10.5 (65) to 2.7 (15).

There were a number of players in the Wesley team that boasted WAFL experience and many others who had played in senior premierships with the club in the middle part of those decade and their experience and class proved insurmountable.

It was not through want of trying, however, and the Beach gave all they had.

The boys arrived ready to play. The warm-up was on point and the boys seemed excited. After the national anthem, our co-captains Joel Brown and Aaron Miller went up and shook hands with the umpires and the opposition captain.

Unfortunately the Beach lost the toss and a significant breeze gave Wesley the early advantage out of the gate and they took it with both hands. At the first break North Beach trailed 3.2 to 0.1 and were playing catch-up thereafter.

While the Beach dominated the second quarter in terms of possession and time in forward 50, they did not convert chances in front of goal, kicking 1.5 to Wesley Curtin’s 1.1, which was a major factor.

After half time, the focus was based on limiting Wesley Curtin’s influence with the wind. That was achieved, scoring 1.2 apiece, but after losing key target Tom Orford to a serious ankle injury in the third quarter, the Beach was a man down on the bench.

The wind subsided and although the Beach fought valiantly and tried to attack at all stages, Wesley took advantage of turn-overs and were destructive on the counter-attack.