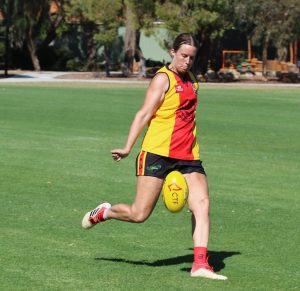 The North Beach women launched into the 2021 footy season with a great opportunity to build on what had seemed an eternity of pre-season with stop start lockdowns.

The C4-Grade Peak Body Fitness were uncompromising with their attack on the footy and took the game on, adding to their ever increasing level of game sense against Swan Athletic on Saturday. This led to keeping their more seasoned opponents at bay for more than a half of footy.

Outstanding performances from Anna Laycock, Lauren Hutton, Chelsea Cowling, Zoe Bain and Kaitlin Koh, but what was pleasing was the newbies added to the Ressies roster of Kassie Tyers, Bec Mirchef and Lorry Plummer to name a few.

Beach captain Mel Plant played her role perfectly as she repelled centres clearances at will. The team also celebrated its first ever ‘double falcon’ mark by Laura “Irish” Kelleher. Not to be outdone Laura also had a wardrobe malfunction and was sighted on the far wing taking off her shorts and skins and giving them to an unsuspecting North Beach supporter.

She returned to the field shorts back on after asking the umpire to wait and had some great touches.

As we say ‘we’ve got a plan’ we’re not measuring the wins but how we play our brand of footy. Massive shout out to Sas, Alice and Jesus for making it all flow easily and to the bus loads of North Beach ladies and friends who hit the valley and owned the day.