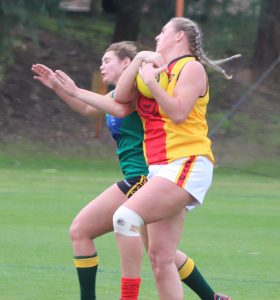 The Galleria Toyota A-Grade women might have had a truncated start to the season, but they have hit the ground running, racking up impressive consecutive victories in the opening two rounds of the season.

After demolishing competition newcomers Rossmoyne in the opening round, they despatched Quinns District in emphatic fashion last Saturday at Charles Riley Reserve.

The Beach jumped out of the blocks in the first quarter with rucks Amy McIlroy and Irenee Chiari feeding mid-fielders Sally Ford, Tessa Anderson and Sarah Viney who provided good delivery to our forwards.

It enabled the Beach top open up a 20-point advantage and they built on that throughout the game.

Unfortunately, North Beach Amy McIlroy to a broken leg and dislocated ankle. The Tigers were forced to re-structure and Quinns surged, but the defence, led by Alice Di Vincenzo was outstanding.

After a scrappy second term, the Beach midfielders assumed control and delivered with precision to the forwards, who rattled on five goals.

Zoe Panagopoulos continued her good form up forward kicking three goals, along with first year forward Ellie Merrett who also kicked as brace. Sarah Cosoleto was as dangerous as ever in the small forward role, finishing with two majors.

Sally Ford was clearly best afield, continually winning the hard ball and her tackling was outstanding, while Merrett, Cosoleto, Steph Dalton, Di Vincenzo and Hannah Campbell were all strong contributors.

The Grange Residential I-Grade produced one of their best performances since entering the competition a little over 12 months ago, taking the game up to a vastly more experienced CBC Green at Dick Lawrence Oval.

They acquitted themselves with aplomb in an evenly-matched contest that was broken open in a couple of strong five-minute bursts by CBC.

North Beach continued its strong improvement this season and kept the pressure on all day. Players such as Lily Goedser, Sam Rowan and Max Letizia stepped up for the occasion with some individual moments of progress of which they can be proud.

A focus on putting the body in, picking up the loose ball and getting it on the boot is starting to pay off for the team and was in full demonstration Saturday.  Taj Denham lit up the crowd with his first goal for the year as the Beach carved out an honourable display in a 9.6 (60) to 5.5 (35) loss.