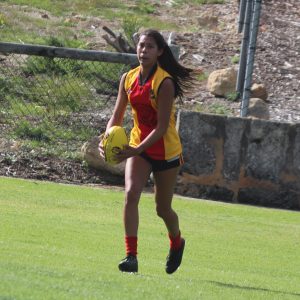 The Galleria Toyota A-Grade women had good reason to believe their opposition covered.

After all, in the opening game of the season, they carried too much class and experience (all of one season) when they welcomed Rossmoyne into the competition.

They expected Rossmoyne would be better the second time around, but might not have predicted just how far the Rhinos had come.

By quarter-time at Charles Riley Reserve, it had become abundantly clear that Rossmoyne had taken quantum leaps forward in the ensuing two months, with little separating the two teams at the first change.

The Beach had operated in the first 15 minutes with a healthy northerly breeze at their backs and they had not achieved the desired advantage from that use. The game was in the balance and the second quarter would be telling.

As good teams do, the Beach responded to the situation, found another gear and then powered on to complete an impressive victory – 4.5 (29) to 1.5 (11).

The success was built initially around strong defensive rebound, led by Taylisha Brown while Georgia Diaz, Jess Meulenkamp and Sally Ford were prominent through the midfield, along with Ashleigh Pianto.

Up forward Beth Zipfell, Sarah Cosoleto and Olivia Stewart were a consistent threat as the Beach chalked up an important victory, further cementing a top three position on the ladder.

On a day of contrasting fortunes – and weather – the A-Grade women and the Grange Residential Integrated teams bookended a big day on the main oval. The women played in bright sunshine, the I-Grade copped the worst of it and played in sheeting rain.

They were brave in the conditions, remained resolute and produced some remarkable skill, particularly given the difficulties around execution.