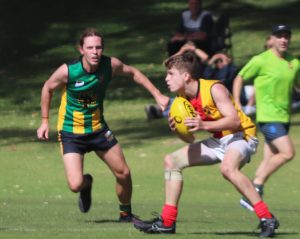 The physical and metaphorical future of the North Beach Football Club will become clear as the club prepares to play its first official match under lights at Charles Riley Reserve on Friday night.

Last week the club had the official unveiling of the club’s new floodlights, ‘Flick the Switch’, at which dignitaries from the City of Stirling and key club sponsors attended.

And now the Plasterwise Phil Scott Colts are poised to play the first match on the illuminated venue the Beach has called home for 55 years.

Plans for the lighting upgrade at Charles Riley started before players in this exciting young team were even born. This group of players are 20 years of age or younger and represent the next generation of the Tigers.

It is apt that they should play the first fixture under the new bright lights, against Kingsley on Friday night at 6.30pm and the club is hoping for a big turn out of the North Beach faithful for this ground-breaking event.

This game was brought forward to avoid the annual issue of the younger players in amateur football opting to convoy down south to attend the Groovin The Moo concert in Bunbury.

So the players can fulfil their commitment to the North Beach colts and still attend one of the most popular music festivals in the State.

It also gives the club the opportunity to showcase an exciting group of talented youngsters. The Phil Scott Colts have been in good touch, although they missed an opportunity to consolidate a top two position when they had to be satisfied with a draw against Scarborough last Saturday.

They will be keen to rebound against Kingsley, who have returned to A-Grade this year after working their way back, having spent several years in lower grades.

The O’Rourke Realty A-Grade (2.30pm) and the Lifenet A-Reserves (12.35pm) will play at the usual times on Saturday.